The project measures the speed and acceleration of tsunamis and also keeps an eye on other movements in the ocean.

Things used in this project

Earth is made up of 71% of water and has vast oceans with a lot of water. Oceans help us a lot but also cause lot of damage to life and property, mainly in the form of tsunamis. The Title... yes we are observing the ocean surface movements but not controlling it as it is IMPOSSIBLE to go against the force of nature! Back to problem. The problem is that the tsunamis are unpredictable. After their occurrence we just estimate the time required to come to shore based on its initial velocity, but as it develops and moves the velocity may increase; accelerates and the direction may also change which can make the predictions incorrect. 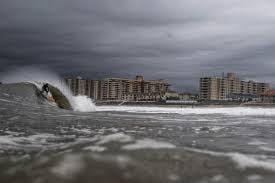 1 / 3 • Showing the predictable effect of this wave

The solution to the problem is that we can get the movement of waters in real time. Currently the way they see the upcoming wave is by use of satellites and/or boats which is slow and also not so real time. The way it can be easily identified and recognized is with the help of some devices which stay at the place of starting i.e., epicenter and calculate and send the data to a server. We can have the device in a barrel or "any such static structure" in middle of the ocean at various locations especially in places where tsunamis are predicted to start. Also the devices can be placed where there are no tsunamis but they can still help to determine ocean currents and other research indicated things as they may also contain some other useful sensors.

The project works by using the Sony's new Spresense board to find the coordinates of the device in the ocean and based on the changes in it i.e., as the coordinates change; we find the acceleration and velocity of wave. This is done by using haversine formula according to which we can find distance between places based on co-ordinal points (logic below). So, if we take GPS measurements in very small time (here 1 sec), then we can find distance traveled in particular time interval and its direction also. Then we can easily find the acceleration of the wave. Ideally the data needs to be transferred by satellite communication as there is no GSM/WiFi in middle of ocean, but for proof of concept, here we are using WiFi to communicate with server.

We can also use the new tech of sending some short messages with GNSS (mostly disaster related, but data can also be sent?!) to the connected satellites like with the Japanese QZSS Michibiki, which's GNSS devices can receive disaster (disaster / crisis) reports such as disaster information and crisis management information. (So, other way may also be possible?)!